What are featured snippets?

Featured snippets show up in a box that contains the answer to your search query.

It's found straight above the first organic search results. That's why it's also known as position 0, and can be more valuable than the traditionally coveted position 1.

For example, if we do a Google search on "why is the sky blue".

Below is a screenshot of a feature snippet for this search query. 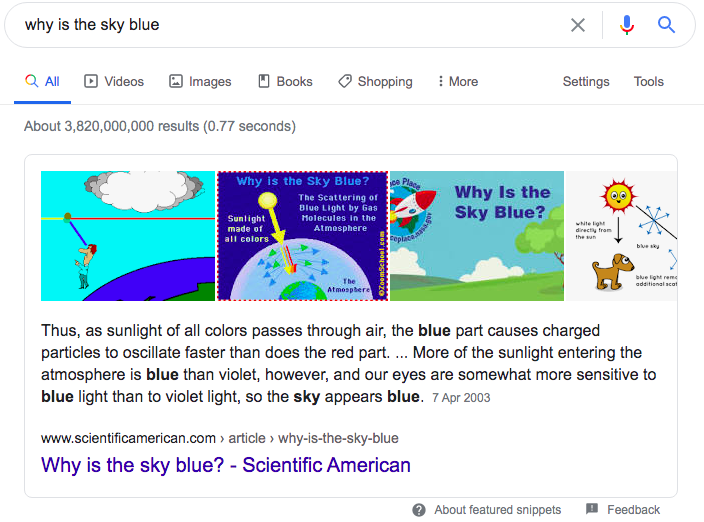 Google will often include images in its featured snippets, but the image source can be different than the answer source.

The screenshot above, for example, has multiple different images from different sources, all of which are different than the source of the answer.

Featured snippets make people's online search experience quicker and easier. They can find they answer they're looking for at the glance of an eye.

How featured snippets are chosen

Google's automated system determines which page would make a good featured snippet to user for a specific search query.

Just think of the exposure you could achieve if Google displayed your content as a featured snippet.

1. An increase in organic traffic and clicks

When you appear in position 1 of SERPs, you're naturally going to gain more traffic and clicks.

In fact, research by HubSpot shows that content with a featured snippet gets a 2X higher click-through rate.

Everyone is after quick results these days, and clicking the first page that appears is the quickest solution to their problem. They won't even have to move a muscle to scroll down the SERP- result!

According to Moz, people who query the who, what, why style of questions are generally more curious and therefore more likely to click on your content to read more.

They don't just want a one-sentence answer; they want context behind the answer too.

This leads to what Moz calls a 'scent trail'. Essentially, if a user clicks your featured snippet and likes the content, then they're likely to explore more on your site.

Not only do featured snippets increase clicks to one piece of content, but they can also increase traffic for multiple posts and pages.

2. Diverts traffic from the first result

Featured snippets are styled differently from the rest of the SERPs. They occupy more real estate, and they are definitely eye-catching.

So using that logic and following on from point number 1, they should attract a lot more clicks, right?

It wouldn't be right to say that featured snippets achieve more clicks than the pages below them all the time, because they don't.

But it would be accurate to say that they help to divert traffic from your competitors. Here's an explanation from Ahrefs data.

So how does that compare to a regular #1 ranking page (with no featured snippet).

When there's no featured snippet in position #1, that page will get approximately 26% of all clicks.

26% vs 19.6%? It looks like the featured snippet is stealing clicks from the otherwise #1 ranking page.

3. A great opportunity to optimise for voice search

If you think voice search is short-lived trend, think again.

Voice search has already become a hit with consumers, who use home voice assistants like Amazon's Alexa and Google Home.

People are using voice search to find answers to their questions more than ever before.

In fact, more than 20% of voice search queries are made up from a combination of just 25 keywords, including question-style words like:

Here's how your brand can start optimising for a voice search strategy.

How to optimise for featured snippets

1. Do your keyword research and aim for question-type queries

Keyword research is an essential tool for any successful piece of content, especially content that ranks for a featured snippet.

Make sure your content includes your targeted keywords, and answers questions that your target audience ask.

Keyword research is an indispensable tool for a successful piece of content, especially content that ranks for a featured snippet. Make sure to answer questions that most of your customers and target audience ask.

After you've carried out your keyword research, don't forget to look at the "People also ask" section on Google SERPs. You'll often find this beneath the featured snippet.

This gives you an insight into the other types of questions that your target audience are asking.

If we type "why is the sky blue" into Google, we are returned a featured snippet. Below this, we can see other related questions that people have asked. 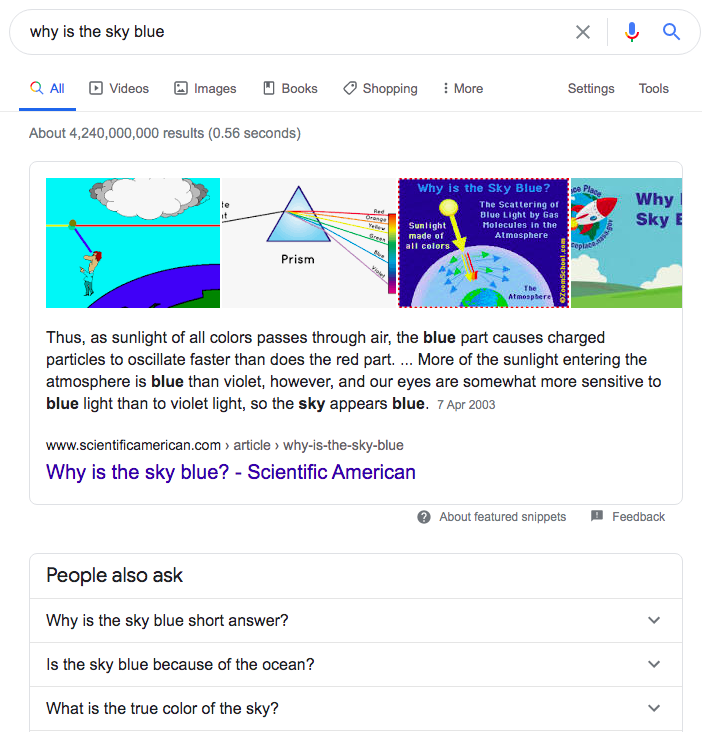 If you click on a question, more questions appear.

Make the most of this tool. It offers you many more opportunities to expand on a topic.

You’ll be able to answer as many questions as possible in a single blog post.

3. Strive for the first page on Google

As we discussed earlier, nearly all featured snippets were already ranking in the top 10 of SERPs.

Getting on page 1 gives you a chance to be featured in a snippet.

Revisit strategies on how to improve your on-page SEO, or contact your digital agency who can help you with this.

Most featured snippets have a length of 40-50 words.

Stay on the safe side and give yourself the best chance of appearing in the featured snippets by keeping your answers brief and straight to the point.

If you’re looking for a SEO agency to increase your organic traffic, then get in touch. Visit our digital agency in Basingstoke, Hampshire. We’d love to help your brand.

Resize, crop, save, repeat. To anyone who’s managed an image heavy website, you’ll understand me when I say I’ve had enough. If you’re a fan of spending hours manipulating and optimising images you have my permission to get it printed on a t-shirt. If not, I’m here to help.

Speak to any SEO specialist worth their salt and the phrase “Schema markup” is guaranteed to come up fairly quickly. It’s one of the most powerful on-site SEO tactics, enabling websites to spoon feed search engines to get featured snippets and better click through rates.

What is Google’s update and what does it mean for your website’s SEO?

Google recently announced an update to its ranking algorithm, which is now designed to judge web pages based on how users interact with the page. Essentially, if Google thinks your website users will have a bad user experience on your site, Google may not rank those pages as highly as they are now.